Sárpo varieties have been in field trials and have been tested in the laboratory at many sites in U.K. and Europe over the last 10 years. Field trials at Henfaes have clearly shown that Sárpo clones have a unique combination of high resistance to both late-blight disease and major virus diseases. Resistance is not absolute as a restricted development of blight can be observed at the end of the season but yield is unaffected.

Our Sárpo varieties have been grown for many years throughout UK and in many parts of Europe and have survived the impact of severe late-blight attack, as in 2007 when other so-called resistant varieties failed to produce a crop.

KNOW YOUR ENEMY – THE BLIGHT PATHOGEN

Hundreds of researchers world-wide are finding out how this organism evolves to devastate our crops; (P. infestans is not a fungus but is an oomycete 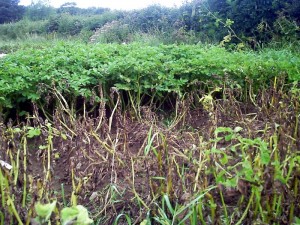 related more to seaweeds and other algae). The pathogen has been around causing mayhem since the 1840s when it arrived from Mexico to start the potato famine in Ireland and Scotland.

Ideally, resistant varieties should be able to resist all kinds of blight and to grow in the presence of blight indefinitely.  But experience has shown us that newly introduced, resistant varieties sooner or later become susceptible to blight due to genetical changes in the blight.  This means that breeding to combat blight has to continue to find new forms of resistance to confuse the blight.

The Trust is part of the global effort to understand the pathogen and collaborates with others as part of a club (www.euroblight) studying blight throughout Europe. P. infestans has changed its spots many times in recent years. In 2005, the Trust, supported by the Potato Council Ltd, identified a new kind of blight in UK.  This was spreading rapidly over the country, replacing some of the older kinds. It was able to mate with our more familiar kinds and was resistant to an important blight fungicide.  But what really worried us was that the new blight (we called it Blue 13 or 13_A2) could knock out some of the most valued varieties for blight resistance (eg Lady Balfour, Cara, Setanta). We were relieved to find out that our own Sarpo varieties can stand up even to this new strain.  varietal resistance

So when we are selecting new blight resistance we need to make sure that the resistance is effective against all kinds of blight (or as many different kinds as we can find).

Fortunately,  AHDB Potatoes funds an annual collection of blight from throughout Great Britain. This works by getting Blight Scout volunteers from throughout the country to send in samples of blighted foliage to Fera Science Ltd. Using this information and Met Office data on humidity and temperature the Council is able to advise growers big and small about the risk to their crops as the pathogen spreads throughout GB. http://www.potato.org.uk/fight-against-blight . Amateur growers can participate in this project by becoming a Blight Monitor (essentially an amateur Blight Scout).

SRT has helped the Council produce a useful booklet of advice on blight control for amateurs.  The booklet can be downloaded here.  Amateur Blight Control

Our research on late blight of tomato

Late-blight disease, caused by the same potato pathogen, Phytophthora infestans, also devastates tomato crops wherever these are grow out of doors. The Trust has collaborated with tomato breeder, Simon Crawford, to select new tomato varieties with high resistance to blight for growing in gardens and allotments in UK and abroad. A KESS studentship has allowed James Stroud to work with Dr Katherine Steele (Bangor University) and SRT in identifying different resistance genes and combining these in new varieties.  An early success has been Crimson Crush, a cordon type that shows good resistance and good taste.

James wanted to know if the strains of blight attacking tomatoes in gardens in the UK were the same as those attacking potato. He arranged for readers of Kitchen Garden magazine and members of Garden Organic to send in diseased samples from their blighted tomatoes and potatoes. Isolates of P. infestans from both hosts were DNA-fingerprinted.  This showed that there were many more strains of blight present in gardens and allotments than in commercial fields of potatoes. However the evidence also showed that the strains on tomato were not significantly different from those on garden potato. So don’t plant your tomatoes close to your potatoes unless they are resistant Sarpo potatoes!