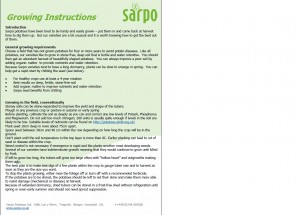 Choose a field that has not grown potatoes for four or more years to avoid potato diseases.  Like all potatoes, our varieties like to grow in stone-free, deep soil that is fertile and water retentive.  You should then get an abundant harvest of beautifully shaped potatoes.  You can always improve a poor soil by adding organic matter to provide nutrients and water retention.

Because Sarpo varieties tend to have a long dormancy, plants can be slow to emerge in spring.  You can help get a rapid start by chitting the seed (see below).

Growing in the field, conventionally

Stoney soils can be stone-separated to improve the yield and shape of the tubers.

Before planting, cultivate the soil as deeply as you can and correct any low levels of Potash, Phosphorus and Magnesium. Do not add too much nitrogen; 200 units is usually quite enough if levels in the soil are likely to be low. Suitable levels of nutrients can be found on http://potatoes.ahdb.org.uk/

Space seed between 30cm and 40 cm within the row depending on how long the crop will be in the ground.

Don’t plant until the soil temperature in the top layer is more than 8C. Earlier planting can lead to rot of seed or disease within the crop.

Weed control is not necessary if emergence is rapid and the plants smother most developing weeds.

Several of our varieties have indeterminate growth meaning that they would continue to grow until killed by frost.

If left to grow too long, the tubers will grow too large often with “hollow heart” and outgrowths making them ugly.

The best plan is to make test digs of a few plants within the crop to gauge tuber size and to harvest as soon as they are the size you want.

To stop the plants growing, either mow the foliage off or burn off with a recommended herbicide.

If the potatoes are to be stored, the potatoes should be left to set their skins and make them more able to resist damage (mechanical or disease) at harvest.

Because of extended dormancy, dried tubers can be stored in a frost-free shed without refrigeration until spring or even early summer and should not need sprout suppression.

Tips for traditional and organic growing

Choose land with good fertility and plough in any winter cover crop.

Low levels of P and K may need to be supplemented.

Some small growers in mild areas leave their long-dormancy, Sarpo potatoes in the ground over winter to be harvested periodically throughout the winter and spring. This method suits those growing for a box scheme and where conventional storage is a problem.

Growing in the garden and allotment.

Choose a sunny plot that has not grown potatoes for 4 years or more to avoid potato diseases. Ideally the potatoes should not follow brassicas in limed soil or other, greedy crops that have used up most of the plant food.

Dig in a dressing of rotted muck, green-waste compost or home-made, garden compost.

Poor soils can be supplemented with a special potato fertilizer that is high in potash.  This may be a mix of chemicals, or partly or wholly organic.

Traditionally, seed was planted at the bottom of a shallow trench, covered and then soil drawn up in ridges immediately or from time to time to help in weed control. Ridges help to dry out very wet soil and prevent new potatoes poking out of the earth and getting green. Ridges can be pre-formed and potatoes dibbled into the ridge. In dry seasons, ridging will dry the soil out rapidly and lead to drought stress.

Alternatively, potatoes can be grown on the flat or in a raised bed.  After cultivation, just dibble a hole and drop the seed tuber in so that it is covered by 10cm of soil. If new potatoes poke out, cover them with soil or a top-dressing of your favourite mulch.

Space your tubers to allow each plant room to develop and give a good crop. Traditionally, this was in rows 75cm apart and 20cm apart in the row for earlies and 30cm for maincrops.

You can try other designs that give you a roughly equivalent density of plants.

Remember that close spacing of plants will give smaller potatoes and wider spacing, larger ones suitable for storing and baking.

You can dig your potatoes when they are still quite small. These immature ones with a more waxy texture can be scraped and boiled or steamed without delay. This gives you the good old, new-potato flavour.

Main crop varieties are slower to form new potatoes and are usually left to mature to give large potatoes suitable for storing. As soon as the potatoes are large enough, cut off the foliage and leave the crop in the ground for three weeks to allow skins to thicken and any blight spores around to die off.

Do be careful to dig up main crops on a dry day and allow them to dry in the breeze before gathering to store in a dryish, frost-free and dark shed.  Never wash tubers for storage and never store in polythene bags.

Our vigorous Sarpo varieties are ideal for planting in an uncultivated piece of ground, full of weeds. Weeds can be cut and the area covered with sheets of cardboard. Seed potatoes are then spaced out and covered with a thick mulch of nutrient-rich, organic matter.  Find out more at www.learn-how-to-garden.com

You can be eating delicious new potatoes from pots or tubs in May or even grow enough large maincrop potatoes in tubs to get you through the winter.  Here’s how.

Use a container of a good size, rich compost and chitted seed.

You can grow in tubs, pots, bags, growbags or one of the many potato bags now available.  Pots as small as 8 litres are suitable for growing one seed tuber whereas for maincrops you’ll need a tub of at least 35 litres for two or three seed.

Fill containers with good multipurpose compost or homemade mix with leaf mould, or garden compost and garden soil. The mix should be water-retentive yet well drained so add perlite or sand to help drainage if in doubt. It helps to enrich the compost with a balanced plant food like Vitax Q4 or similar.

To get an early start, plant single seed tubers in small pots of compost and grow on in a heated room until the shoots begin to emerge and the plant is well rooted. Repot deeply into the final container and keep plants well watered to prevent common scab.

Use a liquid feed regularly if plants look starved.

Take a look at some of the HOW TO videos where experts show you how to grow massive quantities of main crops in containers. Dan Unsworth tells you how to grow 11lb of Sarpo Mira in a 30 litre tub at https://www.youtube.com/watch?v=dMrkIecqQL8

Remember you can plant even main crops as late as July and earlies as late as August to get fresh new potatoes in the run up to Christmas.

Sarpo potatoes have an extended dormancy.  This makes the seed unwilling to sprout in the spring.  Give your seed some warmth and light and it will start to wake up and sprout (chit). Setting them up in egg boxes or trays in a windowsill will get them started.  Planting sprouted seed means that the crop will mature faster too.

Virus diseases: all our varieties have excellent resistance to the common potato viruses that cause rapid degeneration in most other varieties.

Common scab: you can prevent scab on the surface of the new potato by making sure that the soil/compost never gets too dry.

Blight spores get washed down to the developing potatoes and can cause a brown, firm rot.  This tuber blight often allows bacterial rots to develop which are soft and smelly.

Our Sarpo varieties are bred to resist blight but when there is a lot of it about, the foliage may show some blackish spots typical of blight.  Sarpo and Axona are our most resistant varieties but even our least resistant variety, Blue Danube, does not get blighted as soon as susceptible varieties and its potatoes have a good high resistance to tuber blight.

This parasitic worm forms tiny cysts that survive in soil for at least ten years.  Plant roots become infested early in the season and growth is poor and stunted.  Plants turn yellow well before they are ready for harvest.  It is very common in old gardens and allotments where potatoes have grown.  You are asking for trouble if you plant non-certified seed as the cysts are carried around on tubers and in soil.  Our Blue Danube and Kifli both have resistance to the older form of Potato Cyst Nematode but a newer form has spread recently and none of our varieties have resistance to that.

Traditionally, earlies were planted in early spring when soils are warming up and less waterlogged.  Maincrops were often planted a bit later.  But you can break all the rules if you want!

If you want early potatoes in May and June, you can plant in most areas in March.  Earlies like Sarpo Una are really short season varieties able to mature in about 65 days if conditions are good. But if weather is bad it is better to keep the seed chitting and plant in April or even later. Una is unlike most other earlies as the plants can grow on for 100 days or so and produce a heavy crop of large tubers.   Una is good for second cropping too because of its late-blight resistance.  Plant in August to harvest in late autumn up to Christmas.  You CAN have proper new potatoes from May to December if you want.

For summer and autumn eating, early maincrops like Sarpo Shona, Blue Danube and Kifli are best. These take about 100 days to mature and can be planted early or later.  Maincrops to give you large potatoes for storing take about 120 days and can be planted along with the earlies to give a long growing season. Just be careful not to leave them growing too long when they get too big. Some of our fans plant Sarpo Mira or Axona in July in pots and take them into the greenhouse to grow on and avoid frost.